A favourite brunch option for those who prefer to pass on the bacon, our take on avo-on-toast is brightened up with a variety of textures, the sweet kick of Roquito® pepper pearls, and a sprinkle of omega-rich seeds for a nutrient boost.

High Pressure Pasteurisation (HPP) not only ensures the shelf-life of our avocado products without the need for preservatives, it also deactivates the enzyme that causes avocados to brown after contact with the air – meaning your dish will look perfect from preparation down to the very last bite. 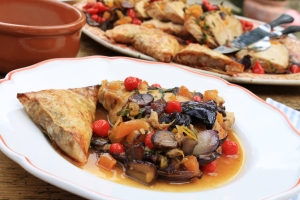 2. Mix the butter and 1/2 tsp raz-el-hanout together. Season with salt.

3. Season the turkey breast with salt and raz-el-hanout (use this as you would pepper) the butter all over the flesh side of the breast.

4. Next, heat the vegetable oil in an ovenproof frying pan. Fry the turkey breast, skin side down, and the quartered red onions, cut side down, over a medium to high heat for 1-2 minutes until both are golden. Turn the onion. Put the pan in the oven and roast, with the turkey still skin side down for 33-35 minutes (The breast should be around 65c which takes it to around 70c after a good rest, use a meat probe thermometer, for the best results)

5. Once the breast is cooked, remove it from the oven. Brush the breast and the onions all over with the melted butter in the pan. Put the breast onto a cooling rack skin side up, put the rack over the pan with the onions, cover very loosely with foil. Leave in a warm place to rest for 10 minutes or up to about 20. Turn the oven up to 230c/gas 8

6. While the breast roasts, make the parcels. Mix half of the sliced chestnuts together with the onion chutney. Unroll the filo pastry, peel off 2 sheets, lay them on your work surface. Brush one with eggwash and then put the second on top. Brush this with the eggwash. Cut the filo into 4 strips widthways. Spoon a quarter of the chestnut mixture onto the bottom of each leaving a 2cm border.

7. Take the right corner of the filo then fold diagonally to your left, enclosing the filling and forming a triangle. Press down to seal the edges. Turn the filo back over the opposite way. Fold again along the upper crease of the triangle. Keep folding in this way until you reach the end of the filo strip. Brush the outer surface with more egg. Put the parcels on one side of a lightly oiled baking sheet. Bake for 5 minutes in the pre-heated oven. Take the tray out of the oven, scatter the sliced chestnuts in a single layer over the other half of the baking sheet. Brush them with vegetable oil. Bake for 5 more minutes until the parcels are golden and the chestnut slices crisp.

8. To make the sauce, get a medium sized sauce pan. Add the orange juice, honey, garlic, ginger and 1/2 tsp raz-el-hanout. Put the pan on a high heat. Bring to the boil. Boil for 1 minute or until the mixture is just thick enough to lightly coat the back of a spoon. Take the pan off the heat. Add the extra virgin olive oil, dried apricots, Roquito® Chili Pepper Pearls®, lemon zest and lemon juice. Season to taste with salt and sugar. Add the sliced mint at the last minute.

9. To serve, slice the turkey breast and put it onto a large platter with the onions. Spoon the turkey’s cooking juices and melted butter over the top. Spoon the sauce over and around the turkey. Put the parcels to one side. Scatter the sliced chestnuts over everything. Serve with the yoghurt.

Posted by Leathams | Filed under Recipes 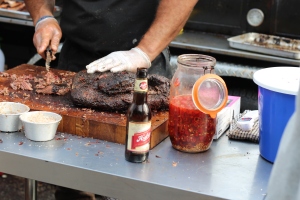 This weekend I had the pleasure of attending the meat and music festival, Meatopia as Leathams sponsored this event with its Leathams brand; Roquito®. Set in the grand and historic Tobacco Dock in the heartland of the old East London Dockland area, the recently refurbished site had the perfect grandeur befitting of a meat lovers paradise. For days the embers of top chefs’ BBQ, smokers and spit roasts sizzled away and their smoke bellowed up into the open roof crevasses and outdoor areas, while festival goers enjoyed a carnivorous gourmet menu of BBQ delight. 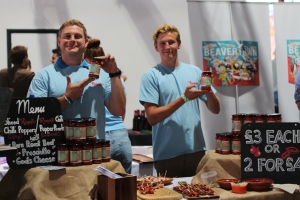 The Roquito® stall was set up in the Sourced Market Tasting Room, where we sampled our Roquito Chilli Pepper Pearls® and Sliced Roquito® Chilli Peppers, which received outstanding feedback from chilli loving tasters who sampled the sweet and fiery Roquito® pepper range. When it comes to Roquito® I do love talking chilli peppers to consumers as they are always so enthused about the product and very little persuasion is needed to get people to try and buy.  However, apart from being wedged between two of the best craft beer brewers, Crate and Bevertown, the highlight of the weekend for me for the amazing food I tried from around the festival. 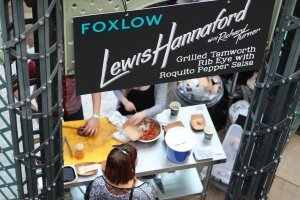 We were honoured to have Lewis Hannaford & Richard H Turner of Foxlow London develop a recipe with our Roquito® peppers. Succulent and sweet with a little kick, their amazing Grilled Pork Ribeye with Roquito® Pepper Salsa, which was a melt in the mouth sensation of BBQ flavours and went down a storm with meat and Roquito® fans alike.

The chef’s stand with noticeably long queues all weekend was Beau Myers of Almost Famous in Manchester. On both days of the festival they cooked up burgers with added ingredients that were guaranteed to tantalise every taste bud and stimulate the senses.  I was lucky enough to catch the queue at the end of the day when it was small enough to tolerate and get the Californication burger: Chuck, brisket & marrow burger, Pepper Jack cheese, slow cooked BBQ chicken thigh in butter & buffalo sauce, grilled fresh jalapeño peppers, crispy BBQ dusted chicken skin, bacon rain, avocado jalapeño herb mayo & smoked chorizo mayo in a brioche slider bun. Wow what can I say, delicious, juicy, gut busting layers of meaty flavours. 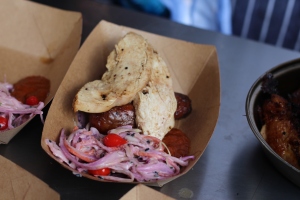 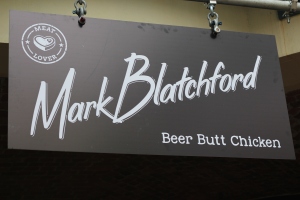 It wasn’t only the guys from Foxlow cooking up a storm with our Roquito® Chilli Peppers Mark Blatchford of London restaurant Meatlover added the Roquito Chilli Pepper Pearls® to a coleslaw accompanying their Beer Butt Chicken, giving it an extra sweet chilli kick. Absolutely top notch and a nice bite of white meat relief from all the pork and steak on offer. 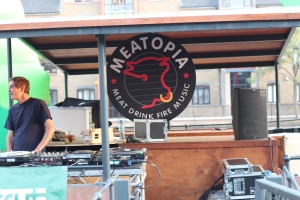 If you are the type that loves the lingering aroma of sizzling embers and charred meat, gut busting food and exotic, spicy flavours and didn’t get a chance to visit this this year, then I would highly recommend you check it out next year. A chance to try some of the best BBQ offerings that global gourmet chefs have to give, in the company of good drink and music, set in an iconic venue doesn’t come around very often! 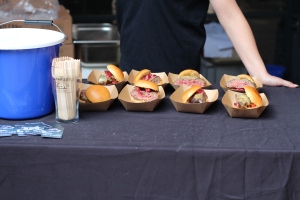 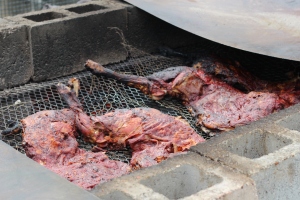 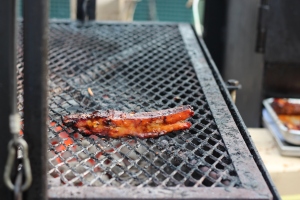 Last Friday there was a palpable sense of celebration in the air. Revellers adorned in flags could be seen drinking beers and singing patriotic songs on the streets of London. However, these were not the normal group of sunburnt British sports fans. Given England’s recent athletic failings national pride is running at an all-time low. No, this patriotism belonged to our American cousins; lauding their victory over the country which hosts them and celebrating the birth of the U.S.A.

The 4th of July (or should that be July 4th?) was American Independence Day and London was a shimmer of stars and stripes: mechanical bulls and cheerleaders could be found at the Steam and Rye, there was a huge picnic in Portman Square exclusively for U.S. citizens, and the Blues Kitchen hosted a hotdog eating competition. As I tucked into a double chilli bacon cheese dog, I began thinking about the popularisation of American food in England. American style diners and grills continue to perform well in London, with interest in gourmet burger joints and hot dog stands reaching near manic levels. But why are we so enamoured with food from across the pond? And should the trend be encouraged? 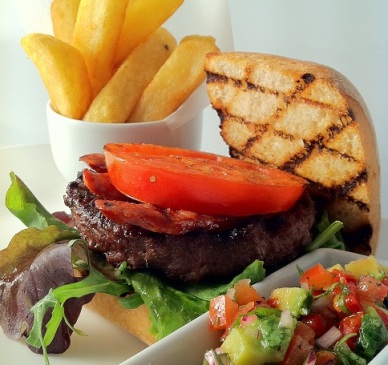 The first question is easier to answer, after all who doesn’t love a good burger? American cuisine is full of fat, sugar, and salt, and is therefore delicious. Equally, as pointed out by Paul Buckley, marketing and consumer psychologist at Cardiff Metropolitan University; “American foods have been easily assimilated into our culture because they’re fairly bland […], there’s no learning curve for consumers like there is with more complex food”. People know what they’re getting, which makes for great comfort food. The reliability has also helped restaurateurs get their American themed businesses off the ground. Compared to risky new concepts, banks are more likely to fund a burger joint which is considered a ‘sure thing’. Plus ingredients are cheap and readily available, a fact which inspired Tom Byng, founder of Byron, to label American cuisine as “perfect recession food”.

In fact, the recession helps explain the rise of American food in more than one way. In these times of cuts and austerity, it offers the UK consumer a bit of fun. The same phenomena occurred in the 1950s: hard times in the UK make American culture shine. Big, colourful and kitsch, who else would think of stuffing the crust of a pizza with a hot dog? Bad taste has never tasted this good. 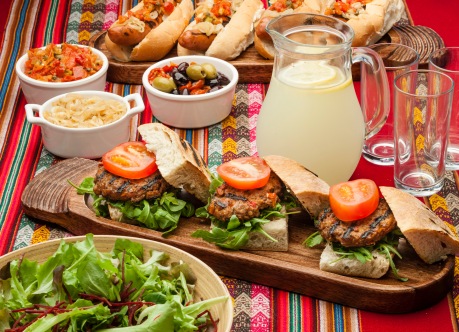 But should we celebrate this American craze? As the festivities got the better of me, I too raised a bud to toast American Independence, later thinking how ridiculous this was. The 4th of July commemorates America’s victory over the UK, and there I was celebrating our historic loss. Whats more, American victory has reached beyond the battlefield. The U.S. dominates us culturally and politically, and is beginning to push us around in the kitchen, with our burger and hot dog obsession appearing to make us forget our own food culture. As pointed out by Marina O’Loughlin, The Guardian’s food critic: “I do get the impression that we think everyone does everything better elsewhere – typical Brit self-deprecation. Shame, as our indigenous produce knocks almost everywhere else out of the water.” Why not beat the drum a bit louder for our world-class seafood and meat, Jersey Royals, Yorkshire rhubarb, cask ales and crisp British apples – and the hundreds of dishes we can make with them?

It can also be argued that the reliability of American food is stifling culinary innovation. Reliability manifests itself in terms of similarity; whether you fry it, bake it, or flame it on a grill, a burger is still a burger. The range in US restaurants is inevitably quite small, and as they continue to overrun the high streets, our culinary horizons are shortening. 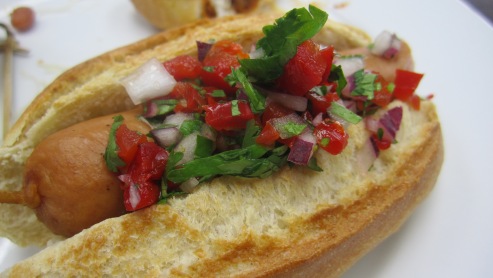 But why change a winning recipe? People want burgers, and you can’t blame the restaurants for accommodating this demand. If anything, attempting to make a familiar formula stand out requires more imagination than when dealing with unusual concepts. Try a burger with goat’s cheese, avocado and SunBlush® tomatoes, or a hot dog loaded with a tangy Roquito® Chilli Salsa, and tell me that those aren’t innovative flavour combinations.

American comfort food makes people happy, and in this age of vegan, gluten free food, the happiness inspired by this gluttonous, greasy grub offers a sweet respite. As proclaimed in the American Declaration of Independence; all men have the right to “life, liberty and the pursuit of happiness”. And with this American principle still fresh in our minds, burgers aren’t just an option, they’re a human right. 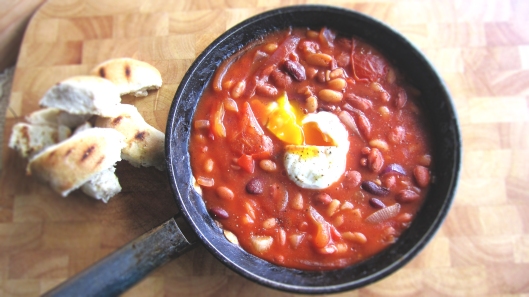 Posted by Leathams | Filed under Recipes